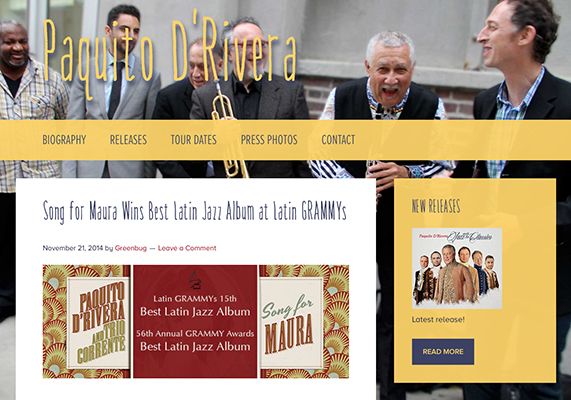 Congrats to my client, Paquito D’Rivera, on his second GRAMMY win for the album "Song for Maura" with Trio Corrente. First with the GRAMMYs and second one with the Latin GRAMMYs.

I was caught off guard by an informal email, "We just won a Latin GRAMMY… we need something good online!" It was 6:00 pm and I was getting ready to sign off for the day. I didn’t realize it was THE DAY!

Artwork – so what are the Latin GRAMMYs using to promote their stuff? Off I went because if you are going to announce winning a GRAMMY, you need something in sync with what they are using. The website itself was still airing the broadcast and the only sign of the win was the updated web page. Obviously they still had a long ways to go. No help there. Next stop was Twitter – yikes! The updates were way behind. It took until 9:30 pm, but finally I had something I could use (screenshot of the win announcement) and a style I could go by. In the meantime, I quickly created some artwork they could use the next day for a blog post announcement and fired off to the client for approval.

Working with such a talented client and management, is fun because it keeps me on my toes!

It hit me after all the excitement – Shoot! The new website is just hours from being finished! We were converting the Paquito D’Rivera website at Arts Assistance to a brand new responsive (mobile) design. Traffic to the website would be spiking and wouldn’t it be nice to have the new website live?

I don’t know how my client’s management survived my many emails – but we got the proofing done and went live within 24 hours. WAHOO!

It has been four years since the last website design update for the artist. You might not be aware, but there has been a fundamental shift in website development. Responsive design (mobile friendly) has become the new standard since 2010 (some may say even 2009). Even Google is trying to push for everyone to convert. But we needed the right image and design that reflected the personality of the artist and finally we had the perfect picture!

Within three days of launching – Google had indexed the new website. Wow!

What You Need to Know

Google now identifies mobile-friendly websites in search engine results to mobile users. Why? Because no one on a phone wants to squint at tiny type!

Check out the screen shot I took of Google search results. 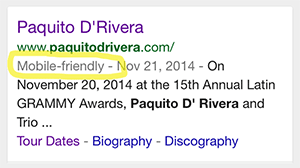 Google definitely favors mobile sites. For businesses, desktop-only websites that aren’t mobile friendly are losing to competitors who made the switch.

Make 2015 the year you switch to a responsive design so your site is viewable to all device users. After all, doesn’t everyone use their smartphone to surf the web?